We got to Athens yesterday,and it is working out to be quite an adventure. Flight was 9.5 hours long and we lost 7 more to time change. When we got to Athens we found out that the Metro which we planned on taking to the hotel was on strike, and so were the buses, and even the taxis. Luckily we found a private bus company shuttling people to the center of town. It got us to within a little more than a mile from our hotel. Thankfully our suitcases all had wheels because we has to walk about a half hour through some pretty scary neighborhoods. We even saw a group of about a dozen people shooting heroin in broad daylight. A lot of sleeping was in order by the time we got there.

Today the Metro was running, so we were able to take it to the historic district. We toured the Acropolis, the museum and about a dozen other ruins. A lot of very impressive history in this town for sure. Exactly what I imagined. We did a little shopping, a lot of walking and had some pretty good chow.

Tomorrow we have a few more hours in Athens then we take an overnight ferry to the island of Rhodes. Having a great time but looking forward to getting to the shooting.

In order to simplify my life and allow our program to be run more as a committee we will no longer send out match invititation emails. Starting with our October match the invitation will be posted solely on our blog at www.yorkpistol.blogspot.com about a week before the match. It will be just like the invitation email and will ask for name, USPSA #, division, and squadding preferences to be sent to our sign up email address as before. That address is yorksignup@gmail.com

Be sure to bookmark our blog and check it often. You may even subscribe to it so that any time something is posted you are notified, so you won't miss anything (like match invites).

I am retaining my title as Match Director, and there will be no noticable change to the quality of our matches I assure you.


Howard
Posted by Howard C. Thompson at 1:44 PM No comments:

We're back, we're tired and we're busting our humps getting ready for World Shoot, but I thought I should report on Nationals. After 4 days of shootig in 100 degree heat Ben came out on top again. He won his 4th High Jumior title. He was also 14th overall, and bested many great shooters.

We leave Tuesday for the World Shoot, so we probably won't see you before we leave but I know you're behind us.
Posted by Howard C. Thompson at 3:46 PM 5 comments:

I am terribly sorry folks, range conditions are such, that I fear I cannot produce an adequately challenging and safe shoot for you this month. The layer of mud and muck from last week has turned into a layer of peanut butter, gluing everything to the ground and making movement difficult. And with rain predicted at 60% the majority of the week, it isn't looking better.
Therefore there will be no funshoot at all this Saturday (Sept. 24), and the Invitational Team Trophy Funshoot is postponed until October 22nd.
If this presents any scheduling issues, please email me and I'll issue refunds as necessary.
Sorry to disappoint, and thanks, see you in October!
gary  iwlafunshoot1@comcast.net
Posted by Gary S at 6:20 PM No comments:

Rob sent me this

Rob sent me this link a long time ago. It is amazing.

http://www.youtube.com/watch?v=tlMz2sCDCA4
Posted by Howard C. Thompson at 3:02 PM No comments:

A big thank you

Now that the dust has settled, I would like to take a moment to thank those responsible for Sundays match at York.

First and foremost, you have to understand the enormity of the task, I mean literally 5 feet of water in the stat shack, most everything in there lost; tossed around concrete, a berm lost, most of our props relocated, shooting benches that were actually spotted in Lake Redman. Remember the mud out front? It covered everything in the back too. We had one guy who spent the majority of Saturday shoveling it off the back pits with a coal shovel. The head of our rifle program showed up, shook his head, gave up on his schedule for NEXT year, and left.

Enter the big kahuna himself, Howard, he is mostly to blame for our success; he managed to rally the BEST (and possibly the most insane) match crew in the world to get the job done. Basically living there for 3 days, he rallied us in shifts. Come Saturday when new folks arrived and had that deer in the headlights look, he began the absurd task of building stages amongst the muck. Stages? Are you kidding me? Stages for what?! But it worked, and we pulled it off as a team.

And then there is Chet, head of our trap program, he is relentless. When not helping pistol, he and his crew are working to recover the automatic clay bird throwers that were all under muddy water and now unserviceable until rebuilt, by sometime in the late winter. As of yesterday the water finally receded enough that they could start cleaning up, it will take a while.

And Denny with his bobcat, thanks to him we could get vehicles past the curve, he spent all of Saturday rebuilding the drive, fixing several washouts large enough to eat a VW bug.

So next time you are at a local event, not just at York, remember how it is that you can be, it is the dedication of the volunteer staff and directors, that make it possible.

Thank you to all who are a part of Team York!
Thank you for all your hard work and dedication, you guys are the absolute best! Without you we would be lost.

Thanks to everyone for coming out, and especially those who worked to make it happen.
Posted by Howard C. Thompson at 11:18 AM 2 comments:

We are on for tomorrow!

All systems are go. The road is repaired, but parking is a bit trickey, do not park in the grass if at all possible, it is still very soft. If we run out of space at the range, we can park up by the trap house and walk in.

A lot has been done and we're starting to look pretty good. I'm counting on a big turnout tomorrow for set up (10:00am)and if that happens and we don't get anymore rain I expect the match to be go for launch Sunday morning.

It will probably be muddy in spots, the road from the trap building to the ranges is still 4 wheel drive only. Parking is going to be a mess. We lost the berms to pit 8, so we're down a pistol stage. but I'll be surprised if we can't pull off having both the pistol and shotgun matches.

We never quit. We are York Pistol.
Posted by Howard C. Thompson at 4:08 PM No comments:

The situation at York Izaak Walton is bad, but we are working on it.

The storm and subsequent flooding is unlike anything I have ever seen. There is an incredible amount of damage to the ranges, and a lot of stuff is missing. Part of the rifle range was destroyed. I mean concrete slabs ripped out and overturned. Water was at least 5 feet deep inside the stat shack. The refrigerator was turned upside down. Water was so deep it got inside the trailer, and filled every shed. Watermarks at different places show at least 6 feet. All of the props in the back pits were contained by the fences and gates, but is in a big pile in pit 4. The driveway was blocked by a tree in one place and washed out in three with gullies up to 3 feet deep.

Several of us spent most of the day cleaning out the stat shack. We had to shovel mud out, wash everything that can be saved, and throw away or burn a lot of stuff. The road is passable to 4 wheel drives now. I think. Tomorrow we will tackle the trailer, and maybe get to some of the sheds.

Saturday is our scheduled match set-up, and it is now at least part recovery effort. If recovery goes well, we will set up the match. We've got our fingers crossed.

I don't like cancelling matches, and we'll make every effort to host the September USPSA match, and shotgun side match. The decision on the match will be made by 5:00pm Saturday and I will post it here.

Wish us luck.
Posted by Howard C. Thompson at 10:44 PM No comments:

This is what we found. 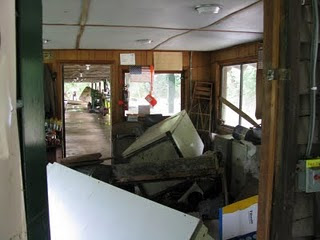 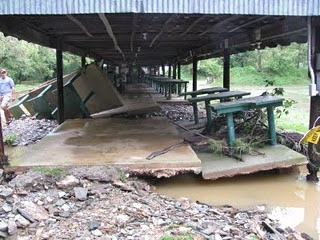 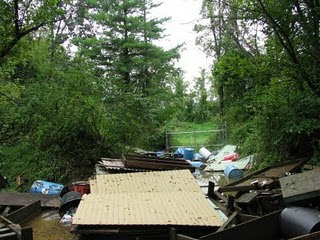 We have a lot of work to do.
Thanks to Mike for the pics I just stole.
Posted by Gary S at 9:17 PM 2 comments:

We are monitoring the flooding at the ranges closely, yesterday afternoon the water level was to the top of the dumpster up front by the clubhouse, and the porta potties were headed for the lake. I'm thinking start position "first, don the scuba gear....". 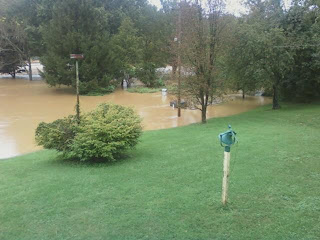 This was yesterday afternoon, our scouts are on site as we speak gathering intel....
g
Posted by Gary S at 6:41 AM 1 comment:

Sign up has begun for next weekend's matches. There will be a 5 stage 110 round pistol in the back pits, and a 4 stage 60 shot, 4 slug, shotgun match in the front pits. Both will cost $20 and you may shoot either or both.

To sign up email Tom at yorksignup@gmail.com and let him know if you want to shoot one or both matches. If you're only shooting pistol let him know whether you want to shoot at 9:00am or 1:00pm. If you're shooting both I'll squad you accordingly so I can keep things balanced. Also, be sure your email includes your name, USPSA #, division for both guns (they may be different) and anyone you wish to be squadded with. Do not hesitate to sign up if you intend to shoot. We will only be taking 80 pistol shooters, and 48 shotgun shooters.

Shotgun divisions include Limited, Open, and Pump as defined by USPSA and Outlaw Open which is unrestricted in any way. Saiga owners bring your drums!